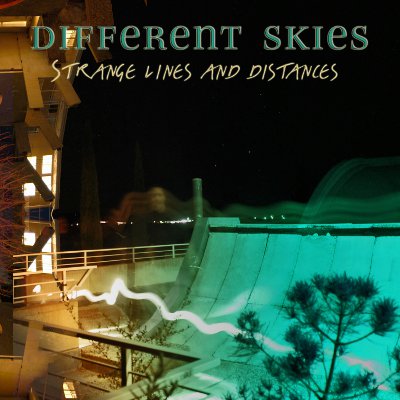 On October 18, 2007, the twenty musicians of Different Skies 2007 came back to their rigs on the main stage at Arcosanti (www.arcosanti.org) after a lovely dinner and a few drinks each, sat down, and began to improvise.

The concept of live electronic improvisation isn't new by any means; some groups do it regularly, and the 'Ambient Train Wrecks' one can find elsewhere on Earth Mantra are marvelous examples of the genre. But there's a difference between improvisation among one, two, or three musicians, and improvisation among twenty of them. When you've created a veritable orchestra of electronic musicians, any one of which has enough gear to carry a full song arrangement on his own, putting them on the same stage and yelling "GO!" carries one hell of a set of risks.

The mantra of Different Skies is and has always been, "Listen Twice / Play Once." In a setting like this one, it is vital that musicians use their ears and only venture onto the canvas very gingerly to add their colors to the palette. Mistakes happen often; some are simple ones like poor timbral choices, notes or chords out of mode or out of time, poor synchronization, and others are deeper and more complex, the most painful being the insistence on being heard, and the resultant layering of noise upon noise until the result is impossible to listen to.

But when these problems are circumvented, the results can be magical.

On this night, the musicians jammed for two hours without a break, with a small audience of Arcosanti residents in the Colly Soleri Amphitheatre and somewhat more of an audience on the Internet via StillStream and Second Life (thanks to Bibi Book for the SL rebroadcast). Problems with the recording apparatus cost us the first 40 minutes or so of the jam, but the final 80 minutes were captured intact. The question then became, "What do we do with this material, if anything?"

Some participants felt strongly that the jam should be released in its entirety, without editing -- so as to give a realistic impression of what the evening's playing was like. Others felt that none of it should be released -- the magic of being in that moment was gone forever, and the music should not have to survive the test of critical listening of those who weren't there.

As is often the case, it fell to me to reach a compromise. While the more rehearsed and orchestrated material of Different Skies has yet to be edited, mastered, and released for commercial sale, I felt that there were enough magical moments in the Wednesday night jam to warrant picking them out, cleaning them up a little bit, and presenting them as musical snapshots of a fun and worthwhile evening. This also holds true of the Thursday night jam, which is to be released as a separate album on Earth Mantra.

Twenty musicians... many of whom had never met one another before the previous Sunday... all on a stage at once... with no one telling them what to play or not play. These are not excuses, they are merely the conditions under which this album was created. The music I feel happy about having you hear, without excuses, is contained in this album. Listen twice...

Music written, recorded and produced by the Different Skies 2007 orchestra, in alphabetical order:

For more information about Different Skies and about these participants, please visit: